Fiscal policy, the second factor, may therefore be more important in explaining buoyant prices. In a normal recession, as people lose jobs and their incomes fall, foreclosures drag house prices down—not only by adding to the supply of houses on the market, but also by leaving ex-home-owners with a blemish on their credit history, making it harder for them to borrow again. But this time governments in rich countries have preserved households' incomes. Handouts through wage subsidies, furlough schemes and expanded welfare benefits amount to 5% of GDP. In the second quarter of the year households' disposable incomes in the G7 group of large economies were about $100bn higher than they were before the pandemic, even as jobs disappeared by the millions.

Other measures directly support the housing market. Spain, for instance, has allowed borrowers to suspend their mortgage repayments. Japan's regulators have asked banks to defer principal repayments on mortgages, and the Netherlands temporarily banned foreclosures. In the second quarter the number of owner-occupied mortgaged properties that were repossessed in Britain was 93% lower than in the same period in 2019, the result of policies that dissuade repossessions. In America foreclosures, as a share of all mortgages, are at their lowest level since 1984. 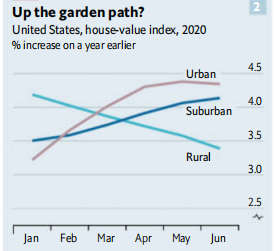 The third factor behind the unlikely global housing boom relates to changing consumer preferences. In 2019 households in the median OECD country devoted 19% of spending to housing costs. With a fifth of office workers continuing to work from home, many potential buyers may want to spend more on a nicer place to live. Already there is evidence that people are upgrading their household appliances.

People also seem to be looking for more space—which, all else being equal, raises house prices. Though the New York and San Francisco housing markets look weak, there is little wider evidence to support the idea that people are fleeing cities for the suburbs, at least in America. Data from Zillow, a housing marketplace, suggest urban and suburban property prices are rising at roughly the same pace; price growth in the truly get-away-from-it-all areas is actually slowing. It seems more likely that people are looking for bigger houses near where they already live. In Britain prices of detached houses are rising at an annual rate of 4%, compared with 0.9% for flats, and the market for homes with gardens is livelier than for those without.

Can house prices continue their upward march? Governments are slowly winding down their economic-rescue plans, and no one knows what will happen once support ends. But lower demand for housing may run up against lower supply. High levels of economic uncertainty deter investment: in America housebuilding has fallen by 17% since covid-19 struck. The experience of the last recession suggests that even when the economy recovers, construction lags behind. It may take more than the deepest downturn since the Depression to shake the housing market's foundations.