This is Scientific American's 60-second Science, I'm Christopher Intagliata.
Antarctica is a lonely continent. But the Antarctic Peninsula, the little "tail" that juts out toward South America, is a hub of human activity. More than 50 scientific research stations are based there. And in a recent travel season, 42,000 tourists visited, mostly from cruise ships.
Problem is when humans go somewhere, hitchhikers come with—like a nonnative flightless midge, an insect that has already taken up residence in the peninsular region.
"And its biomass is greater than the biomass all the other invertebrates in the soil. It's already taking over the nutrient cycling in that environment."
Kevin Hughes is an environmental researcher with the British Antarctic Survey. He and a team of experts recently reviewed a list of 103 marine and terrestrial species that might b﻿﻿﻿e poised to take up residence on the continent. From that list, they pinpointed the 13 most likely to arrive, establish themselves and become invasive in the next decade. 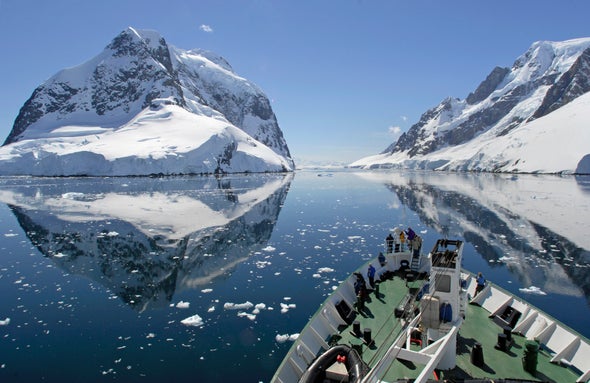 At the top? Mussels, which stick to ships and could carpet shorelines and smother native species. Antarctic shores and shallow waters could also fill with crabs, which haven't existed in those habitats for millions of years.
"So the communities are just not used to these sorts of predators coming in. And the potential for crabs to chomp away at what's sitting on the seabed is quite a frightening prospect."
On land, the scientists flagged a mite, a springtail and several species of buttonweed plants as potential invaders. The full list is in the journal Global Change Biology.
"We have to remember that Antarctica is really one of the last great wildernesses we have on the planet. We want to keep this place pristine for scientific research. Because it's told us so much about how the world works; how climate works; how ecosystems can be put together; how they function. So it's just incredibly important that we just keep it as pristine as we possibly can."
But that task keeps getting more difficult. Because climate change is slowly thawing the "frozen continent," making it easier for invaders to gain a foothold.
Thanks for listening for Scientific American's 60-second Science. I'm Christopher Intagliata.