JUDY WOODRUFF: Now to honoring a civil rights legend in a new way. Producer James Brown of PBS station WXXI reports on how artists in Rochester, New York, pay tribute to the late John Lewis. It's part of our arts and culture series, Canvas.

EPHRAIM GEBRE, Muralist, I Am Speaking: This wall will be a landmark. The colors are not going to fade. It's going to be here long after we're gone. I grew up right across from the Genesee brewery, St Simon's Terrace. It is very exciting for me to come back and just show love to the city that has given me so much. This is a painting of a young John Lewis giving a speech. Original photo is from Danny Lyon, the premier, like, civil rights photographer back in the day. We just wanted to honor his legacy and what he's done for the fair treatment of our people, of Black and brown people. With his recent passing, I just wanted to kind of pay homage to him and his name and his legacy and also bring Danny Lyon's image to life. And so, like it's larger than life. 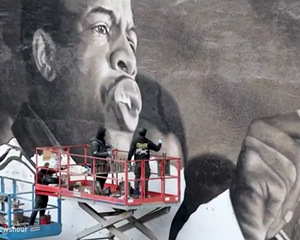 WOMAN: And we don't lose sight of, like, where everyone is going to be going.

EPHRAIM GEBRE: I Am Speaking is the title. And the project is, I Am. So, we have end in Chicago. The first one is I Am a Man. The photo was from the Memphis sanitation strike. Second one was in Louisville, Kentucky, and that was titled I Am Singing. It's a protest photo, like people singing and clapping and like their hands in the air. And then this one is, I Am Speaking. Across the street is the site where Frederick Douglass gave his What is Fourth of July to a slave speech. So, I thought it would be a good idea to name it I Am Speaking. I think it's a good fit. I wanted to stop people in their tracks. I can't control how this piece is going to be perceived. I know all of the collective emotions and feelings, like, delivering this to this community. And it's positive and it's uplifting. I hope that the community feels the same way about it. As long as evoking some kind of emotion is do its job.