Welcome to THE MAKING OF A NATION -- American history in VOA Special English. I'm Steve Ember. This week marks the anniversary of the D-Day invasion of June sixth, nineteen forty-four. It was largest amphibious assault in history, and it led to the end of World War Two in Europe. Allied forces stormed the beaches at Normandy, France. The invasion marked a turning point in the war in Europe, as Hitler's hold on the continent began to crumble. On today's MAKING OF A NATION we take you back to that event, beginning with a decision by the Allied Commander General Dwight David Eisenhower.

On June fifth, nineteen forty-four, a huge Allied force waited for the order to invade German-occupied France. The invasion had been planned for the day before. But a storm forced a delay. At three-thirty in the morning, the Allied commander, General Dwight Eisenhower, was meeting with his aides. The storm still blew outside the building. General Eisenhower and the other generals were discussing whether they should attack the next day. A weatherman entered the room. He reported that the weather would soon improve. All eyes turned toward Eisenhower. The decision was his. His face was serious. And for a long time he was silent. Finally he spoke. "Okay," he said. "We will go." And so the largest military invasion ever known D-day took place on June 6, 1944.

The German leader, Adolph Hitler, had known the invasion was coming. But he did not know where the Allied force would strike. Most Germans expected the Allies would attack at Calais. But they were wrong. Eisenhower planned to strike along the French coast of Normandy, across the English Channel. The Second World War was then almost five years old. The Germans had won the early battles and gained control of most of Europe. But in nineteen forty-two and forty-three, the Allies slowly began to gain back land from the Germans in North Africa, Italy and Russia. And now, finally, the British, American, Canadian and other Allied forces felt strong enough to attack across the English Channel. Eisenhower had one hundred fifty thousand men and twelve thousand planes for the attack. But most importantly, he had surprise on his side. Even after the invasion began, General Erwin Rommel and other German military leaders could not believe that the Allies had really attacked at Normandy. 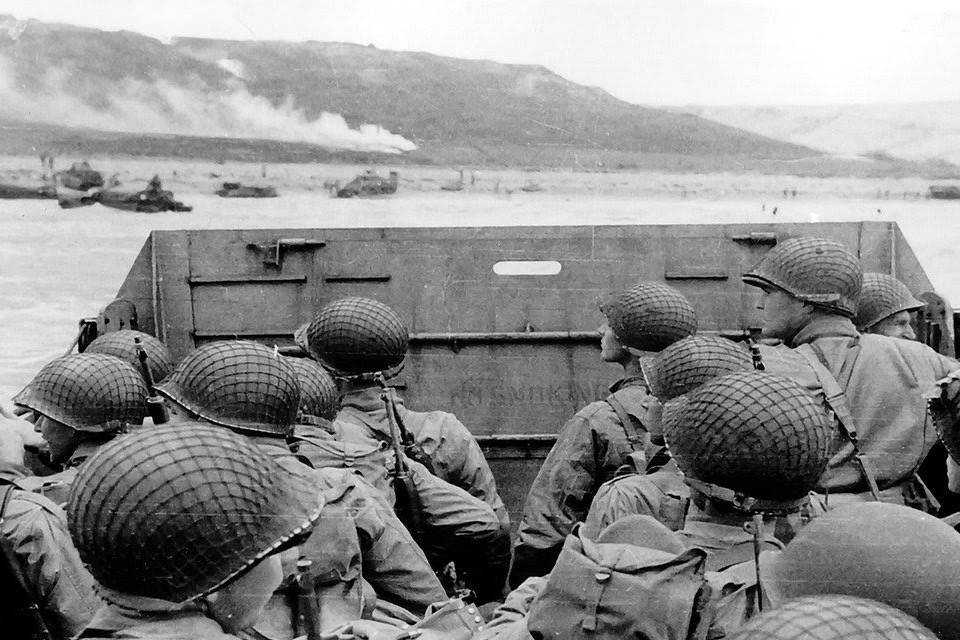 But attack they did. On the night of June fifth, thousands of Allied soldiers parachuted behind German lines. Then Allied planes began dropping bombs on German defenses. And in the morning, thousands of ships approached the beaches, carrying men and supplies. The battle quickly became fierce and bloody. The Germans had strong defenses. They were better protected than the Allied troops on the beaches. But the Allied soldiers had greater numbers. Slowly they moved forward on one part of the coast, then another. "People of Western Europe: a landing was made this morning on the coast of France by troops of the Allied Expeditionary Force." "This landing is part of a concerted United Nations plan for the liberation of Europe. I have this message for all of you: Although the initial assault may not have been made in your own country, the hour of your liberation is approaching. All patriots -- men and women, young and old -- have a part to play in the achievement of final victory.

"To members of resistance movements, whether led by nationals or by outside leaders, I say: Follow the instructions you have received. To patriots who are not members of organized resistance groups, I say: Continue your passive resistance, but do not needlessly endanger your lives. Wait until I give you the signal to rise and strike the enemy." The Allies continued to build up their forces in France. Within one week they brought nearly ninety thousand vehicles and six hundred-thousand men into France. And they pushed ahead. Hitler was furious. He screamed at his generals for not blocking the invasion. And he ordered his troops from nearby areas to join the fight and stop the Allied force. But the Allies would not be stopped. In late August, the Allied forces liberated Paris from the Germans. People cheered wildly as General Charles de Gaulle and Free French troops marched into the center of the city. The Allies then moved east into Belgium. They captured the port of Antwerp. This made it easier for them to send supplies and fuel to their troops. Only when Allied troops tried to move into the Netherlands did the Germans succeed in stopping them. American forces won battles at Eindhoven and Nijmegen. But German forces defeated British "Red Devil" troops in a terrible fight at Arnhem. Germany's brief victory stopped the Allied invasion for the moment. But in less than four months, General Eisenhower and the Allied forces had regained almost all of France.