The sect was numerous and powerful in the Free Cities and the distant east, but there were few in the Seven Kingdoms.

"Lady Stark," Stannis Baratheon said with chill courtesy as he reined up.

He inclined his head, balder than she remembered. 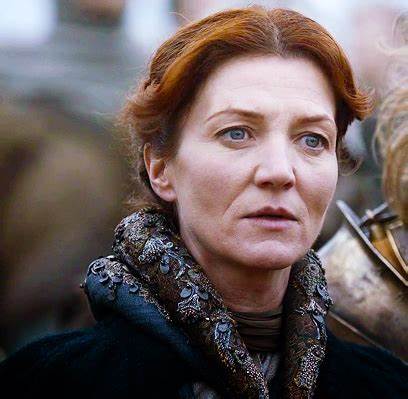 Beneath the tight-trimmed beard his heavy jaw clenched hard, yet he did not hector her about titles.

For that she was duly grateful.

"I had not thought to find you at Storm's End."

"I had not thought to be here."

His deepset eyes regarded her uncomfortably.

This was not a man made for easy courtesies.

"I am sorry for your lord's death," he said, "though Eddard Stark was no friend to me."

"He was never your enemy, my lord.

When the Lords Tyrell and Redwyne held you prisoned in that castle, starving, it was Eddard Stark who broke the siege."

"At my brother's command, not for love of me," Stannis answered.

"Lord Eddard did his duty, I will not deny it.

Did I ever do less?

I should have been Robert's Hand."

"That was your brother's will. Ned never wanted it."

"Yet he took it. That which should have been mine.

Still, I give you my word, you shall have justice for his murder."

How they loved to promise heads, these men who would be king.

"Your brother promised me the same.

But if truth be told, I would sooner have my daughters back, and leave justice to the gods.

Cersei still holds my Sansa, and of Arya there has been no word since the day of Robert's death."

"If your children are found when I take the city, they shall be sent to you."

Alive or dead, his tone implied.

"And when shall that be, Lord Stannis?

King's Landing is close to your Dragonstone, but I find you here instead."

"You are frank, Lady Stark.

To take the city, I need the power of these southron lords I see across the field.

My brother has them.

I must needs take them from him."

"Men give their allegiance where they will, my lord.