"There, I see the whole of Italy; the Apennines, which extend to the Ionian Sea, the rivers flowing here and there, the white cities, the gulfs, the blue bays, the green islands;" and he repeated the names correctly in their order and very rapidly, as though he were reading them on the map; and at the sight of him standing thus, with his head held high, with all his golden curls, with his closed eyes, and all dressed in bright blue with gilt buttons, as straight and handsome as a statue, we were all filled with admiration. In one hour he had learned by heart nearly three pages, which he is to recite the day after tomorrow, for the anniversary of the funeral of King Vittorio. And even Nelli gazed at him in wonder and affection, as he rubbed the folds of his apron of black cloth, and smiled with his clear and mournful eyes. This visit gave me a great deal of pleasure; it left something like sparks in my mind and my heart. And it pleased me, too, when they went away, to see poor Nelli between the other two tall, strong fellows, who carried him home on their arms, and made him laugh as I have never seen him laugh before. On returning to the dining-room, I perceived that the picture representing Rigoletto, the hunchbacked jester, was no longer there. My father had taken it away in order that Nelli might not see it. 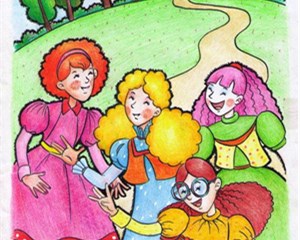